Though vitiligo is not contagious or life-threatening, it can be life-altering. Some patients with vitiligo-a skin condition evidenced by the absence of melanin, the skin’s primary pigment- can experience low self-esteem, have difficulty in social situations and may develop serious depression. The disease can be emotionally damaging. The cause of vitiligo remains unknown and can appear at any age, affecting 1 out of every 100 Americans. XTRAC treatments can minimize and, in many cases, eliminate vitiligo de-pigmented patches. How you cope with vitiligo is a personal choice and our team at the Asarch Center is here to help patients in Colorado choose a treatment path. Recently, a young woman who has embraced vitiligo competed on America’s Next Top Model. Chantelle Brown-Young has become more than a model, she has become a self-proclaimed vitiligo spokes model! Here is her story as originally posted by People Magazine: 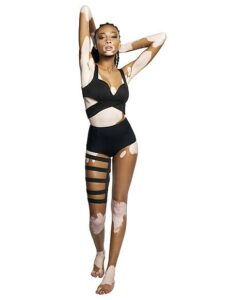 When Chantelle Brown-Young was 4 years old, a mysterious white patch appeared on her stomach. Diagnosed with the skin disorder vitiligo, Brown-Young watched as similar spots spread all over her body over the next few years, including on her hands, knees and face. “The bullying started when I went to school,” Brown-Young, 20, tells PEOPLE. “It was tough. I definitely had problems with self-esteem.” …Her striking appearance caught the attention of Tyra Banks, who discovered Brown-Young on Instagram and asked her to compete in cycle 21 of America’s Next Top Model.

“I’d only been modeling for maybe a year before she found me, so I was pretty fresh,” says Brown-Young, of Toronto. “The fact that she wanted me so badly for her show will stick with me for the rest of my life.” The self-proclaimed vitiligo spokesmodel hopes her run on the show will inspire others to follow their own dreams.  “Growing up, it was a ‘fake it ’til you make it’ type of thing. I just decided, ‘You know what? I’m going to keep telling myself I’m beautiful until I feel beautiful.’ And it happened.”

For patients suffering with vitiligo, there is a laser treatment which offers pain free, long lasting relief and noticeable improvements after just a few short treatments. At Asarch Dermatology, we offer treatments for vitiligo with the FDA Approved XTRAC Excimer Laser.  XTRAC is recognized by dermatologists worldwide as the leading laser used to treat psoriasis and vitiligo. With XTRAC, patients who have undergone other failed treatments have renewed hope. XTRAC clears the symptoms, prolongs the remission and returns skin to a clinically healthy state in record time. XTRAC Benefits: