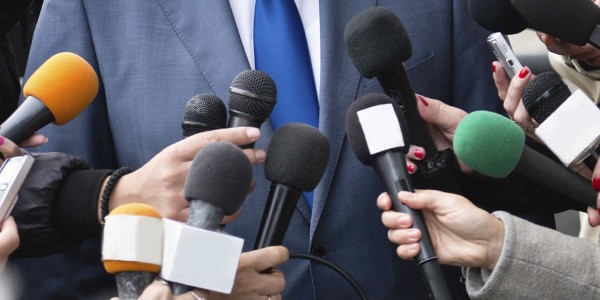 Asarch Center in the Media-Dermatology in Denver

Dr. Asarch, head of the Asarch Dermatology, Laser & Mohs Surgery and DERMAspa Medical Spa, is often featured in the media discussing Dermatology in Denver. Below are some of our recently featured articles, videos and news segments.

The Cools, Inc – Is Your Juul Messing Up Your Skin? Doctors Say Yes.

Outfront Magazine – Nov. 2016: “Ageism Is A Woman’s Thing? Oh, Please. What Men Can Do To Slow Down Aging”
Interview with Dr. Richard Asarch 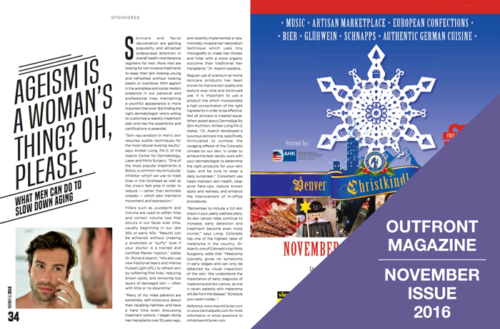 Dermatologist Richard Asarch is the recipient of the Melanoma Research Foundation’sHumanitarian Award, given in appreciation for his commitment to the prevention, early detection and treatment of melanoma, the deadliest form of skin cancer…. 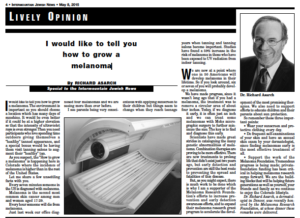 We are now at a point where one in 50 Americans will develop melanoma in their lifetime. So if you look around, six or seven of you will probably develop a melanoma.

We have made progress, since..

Read More: I would like to tell you how to grow a melanoma by Dr. Richard Asarch

Thanks to all of you who purchased DERMAspaRX products during June, we were able to raise and give money to Camp Discovery! Here is the letter from the American Academy of Dermatology.

Thank you so much for hosting an event at your office to raise money for Camp Discovery. So many smiles are made possible by Camp Discovery and your generosity!”

Dr. Asarch was also quoted in the Summer issue of Aspire Magazine. 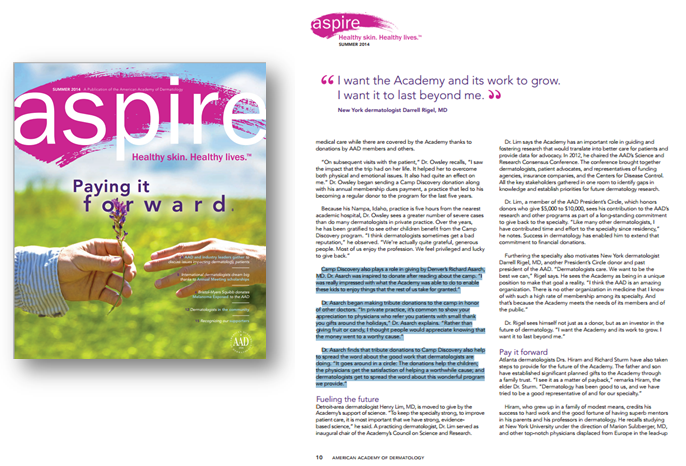 Excerpt- Camp Discovery also plays a role in giving by Denver’s Richard Asarch, MD. Dr. Asarch was inspired to donate after reading about the camp. “I was really impressed with what the Academy was able to do to enable these kids to enjoy things that the rest of us take for granted.” Dr. Asarch began making tribute donations to the camp in honor of other doctors. “In private practice, it’s common to show your appreciation to physicians who refer you patients with small thank you gifts around the holidays,” Dr. Asarch explains. “Rather than giving fruit or candy, I thought people would appreciate knowing that the money went to a worthy cause.” Dr. Asarch finds that tribute donations to Camp Discovery also help to spread the word about the good work that dermatologists are doing. “It goes around in a circle: The donations help the children; the physicians get the satisfaction of helping a worthwhile cause; and dermatologists get to spread the word about this wonderful program we provide.” 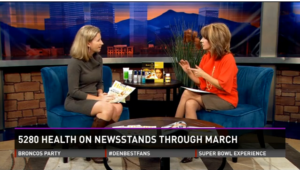 Dr. Asarch’s books and DERMAspaRx Skin Care Product Line was featured on 9news in their coverage of 5280 Health Issue. February 2014. 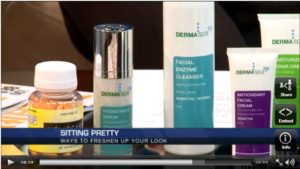 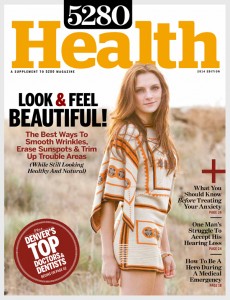 This February 2014, in an article by Julie Dugdale titled Sitting Pretty, Dr. Asarch was asked about the four spheres of caring for your skin.  Dr. Asarch discussed dermatology in Denver as well as the DERMAspaRx Skin Care Line and The Beautiful Skin Diet Book, which he authored. 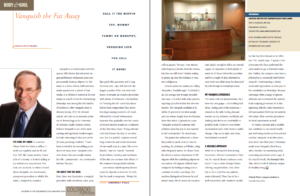 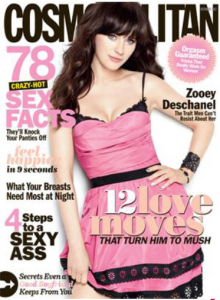 I HAVE DARK PIGMENTATION UNDER MY ARMPITS, SO THEY ALWAYS LOOK DIRTY AND HAIRY. I’VE TRIED CREAM BLEACHES, BUT THEY DON’T WORK. WHAT SHOULD I DO?

Chances are, your dark underarms aren’t caused by hyperpigmentation but result from a persistant buildup of dry skin, says Colorado dermatologist Richard Asarch, director of the Asarch Dermatology and Laser.

“I actually mourned my belly after my first baby was born. It was easily one of the best features of my twenty-something body. After the birth of my first son, it resembled that of a stretch mark massacre. Long gone are the days of the itty bitty bikini.

If you have had a similar experience and continue, like me, to hide beneath your swimsuit cover-up, I can provide you with some hope! There are many treatments available today to help reduce stretch marks. Learn how dermatologist, Dr. Asarch, recommends treating your stretch marks… and in time for SUMMER!”
Dr. Asarch of the Asarch Dermatology and Laser in Denver, CO suggests a new laser treatment called Fractional Skin Resurfacing….

Self – The Beauty Diet 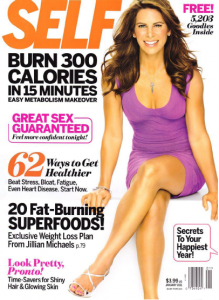 What to eat Wild salmon, sardines, Atlantic mackerel and herring

The beauty of them These swimmers are packed with omega-3 fatty acids, which help decrease inflammation…producing a healthy glow, says Richard Asarch, M.D. 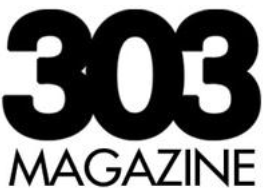 Denver Dermatologist, Dr. Richard Asarch, M.D. warns, “be educated about ingredients when choosing your skin care products. BB creams are being marketed as miracle products by companies that want to sell them to you. Dermatologists have been recommending products that address aging skin, hydrate and protect with SPF for several decades.”

For many of us, winter is the toughest time of year on our hands. Humidity is low and outdoor temperatures are cold. Inside, the air can be even more arid, with indoor heating circulating in our homes and offices. These environmental conditions, along with an increased need to wash hands frequently to avoid getting sick, sap the natural oils your skin needs to stay soft and healthy. Instead our hands become dehydrated and may crack, peel, bleed, and become painful… 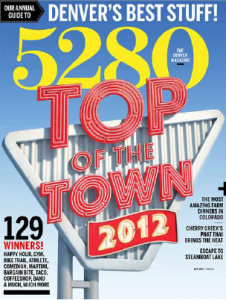 The seasons are changing and the long, picturesque days of our Colorado Summer are calling you to adventure outdoors. This shifting weather and increase in sun exposure during this time has an effect on your skin and is a good time to alter your skin care routine.

We all know the dry Denver climate can wreck havoc on our skin. We also know the basics to try and prevent this from happening – drink lots of water, get eight hours of sleep and wear sunscreen. Good skin is not just a matter of beauty, but of health. But when the basics aren’t enough, it may be time to turn to an expert. Dr. Asarch of The Asarch Dermatology, Laser and SKin Rejuvination helps men and women of Denver achieve health and beauty with his holistic approach to skin treatments and innovative procedures.

Dr. Asarch is a regular contributor at Girls Gone Sporty, spreading his wisdom regarding better skin for those with active, sporty lifestyles.

Dr. Richard Asarch, a board certified Denver dermatologist, also reminds parents that sunscreen needs to be applied daily and not just on sunny days. “Even on a cloudy day, up to 80 percent of the sun’s UV rays can pass through the clouds. Apply an SPF of at least 30 15-20 minutes before sun exposure to allow a protective film to develop.” Asarch continues, “Re-apply every two hours or after excessive sweating or swimming. Use enough sunscreen to generously coat all exposed skin.” 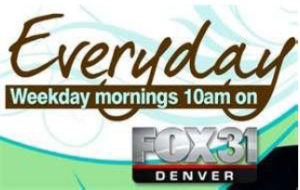 Dr. Asarch shares the high success rate of a new procedure for excessive sweating in a video for Fox 31.

Cover 2 Cover – Look Within When Making Over Your Skin 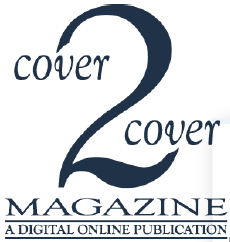 “Nutrition is important for maintaining normal and optimal skin functions and to prevent inflammation, photo-aging and other skin disorders. The effect of adequate amounts of nutrients in our diet for optimal skin health, appearance, and function is widely accepted.” – says Dr. Richard Asarch, M.D.
See the April 2012 issue for more info.

Read More and Listen to the Podcast

Colorado-based dermatologist Dr. Richard Asarch and Nebraska dermatologist Dr. Joel Schlessinger…freely handed out generous handfuls of sweet facts about the pumpkin during our search for tricks and treatments: Pumpkin contains vitamins A and C, Omega-3, antioxidants and minerals to nourish the body and help build tissue.

Halloween unofficially kicks off America’s two-month long holiday season, and what symbolizes the season more roundly than the pumpkin?

After jack-o’-lanterns rear their pretty heads for trick-or-treaters, the pumpkin turns up in desserts, side dishes and Starbuck’s lattes for the remainder of the year. It is also a season when many of us are guilty of “feeding our faces” a little too much.

However, health experts, dermatologists and beauty specialists know that the hearty, humble pumpkin — when used both topically and internally (that is, ingested) — turns the concept of “feeding your face” on its head, so to speak. You can also think of pumpkin as a great all-purpose, naturally occurring beauty product straight from the heartland.

Michelle Noonan, born and raised in Iselin, N.J., swears by pumpkin. The TV host and science correspondent, now building her career in Los Angeles, battles acne and stresses through the zinc in pumpkin seeds. She insists pumpkin facial masks help her control acne flare ups the natural way, without the need for traditional treatment with harsh chemicals like benzoyl peroxide or prescription medications.

Noonan is not alone. Colorado-based dermatologist Dr. Richard Asarch and Nebraska dermatologist Dr. Joel Schlessinger (creator of the Lovely Skin line; www.lovelyskin.com) freely handed out generous handfuls of sweet facts about the pumpkin during our search for tricks and treatments: Pumpkin contains vitamins A and C, Omega-3, antioxidants and minerals to nourish the body and help build tissue.

Applied topically, enzymes from the pumpkin gently exfoliate dead skin cells without scrubbing, which both doctors note can break capillaries and can be too harsh for sensitive skin.

Asarch adds that pumpkin seeds and oils have been used over many generations to make medicines, which, in turn, have been used for treating bladder irritation, kidney infections and intestinal worms.

“The use of pumpkin seeds as a remedy for parasites and kidney problems is well documented in Native American history,” Asarch details. “In the late 1800s, herbal doctors used pump­kin seeds regularly to treat urinary and gastric illness, and for parasite removal. “The pumpkin plant, along with its seeds, has been used in the traditional medicine of many countries, including India and Mexico.”

At the Asarch Dermatology and Laser and DERMAspa (which attract visitors from throughout the United States), Asarch’s team offers a modern therapeutic pumpkin facial treatment. The special treatment package incorporates a skin purification with Pumpkin Clean­ser, a facial massage with Pumpkin E Oil and a Pumpkin Enzyme Peel.

Schlessinger, meanwhile, is particularly sweet on his line’s LovelySkin Pumpkin Clarifying Mask not only because of the appealing and naturally occurring fragrance but also the antioxidant content, which he says improves the skin and protects against free radicals at the same time.

“The antioxidant makeup is the main reason for its success as a skin treatment externally, but the same can be said for ingesting it as well,” he says. “The level of antioxidants directly correlates with the benefits that will accrue for the skin.”

Dr. Ruthie Harper, a Texas-based physician focused on nutritional medicine, non-surgical aesthetic transformation and genetically based skin care, stresses that the enzymes and alpha-hydroxy acids in pumpkins draw out impurities and toxins lodged deep in the skin’s pores.

Those things are replaced with more beneficial vitamins, anti-aging enzymes and nutrients. Adding to this is the fact that pumpkin has naturally occurring UVA/UVB sunscreens thanks to the natural zinc content.

“We find that many people respond better to pumpkin peels than to glycolic peels, with immediate improvement in the clarity and smoothness of their skin,” says Harper. “People with sensitive skin and acne benefit because it is less aggressive than a glycolic peel. Pumpkin, like other plants that have a close relationship with the soil, are often great sources of mineral nutrients. In addition to zinc, they are also sources of phosphorus, magnesium, iron and copper” which support “every aspect of a healthy body.”

Two-time Emmy Award-winning makeup artist and organic cosmetics expert Marianne Skiba aptly notes that pumpkins suffer from type casting thanks to their enduring association with jack-o-lanterns and autumn foliage displays. However, she says she believes it is a superfood for all seasons, as she recommends a pumpkin scrub to clients to remove dead skin cells damaged by too much summer sun, followed by a pumpkin masque and a pump­kin moisturizer.

While New York-based natural skincare expert Suki Kramer’s products (www.sukiskincare.com) have famous fans including Alicia Silverstone, Courteney Cox and Julianne Moore, Kramer says she truly values the opinions and feedback of customers undergoing cancer treatment or recovery who have discovered that ingredients like pumpkin have helped alleviate the after-effects of radiation and/or chemo­therapy that leave skin parched and irritated.